I’ve been meaning to write a story about our trip to Hornby Island in June of this year to celebrate the life of our friend Ben Banky who died tragically in 2008, but the summer turned out to be exceedingly busy at my Gallery on Mayne so I’ve not had the chance. Now, we are just a week away from a second event to honour the 10 year anniversary of his passing on December the 12th (at the Anza Club with Big Head Project & Snass) so I’m buckling down to capture memories of summer before they fade.

When we received word that a weekend celebration was being planned in June on Hornby Island to honour – what would have been – the 50th birthday of our dearly departed friend – Ben Banky – we embraced the thought wholeheartedly. An opportunity to honour our dear friend Ben, and pay a long overdue visit to his parents, extended family and friends seemed like such a fabulous idea that we accepted the invitation without delay. I was grateful to Ben’s widow Linda, and his parents Jake and Kathy for spearheading the idea – grateful too that a trip to one of my favourite Gulf Islands – Hornby, in late Spring – was now in the cards. It would be sublime.

A subsequent email from Jake in early April – via Linda – almost unbelievable in it’s tragic content, cast immediate uncertainty upon all of our community’s celebratory plans for Ben. His brother John was missing and presumed dead – the result of foul play in Northern B.C. Fairness, evidently, is just a concept – lightning can, and has tragically, struck twice.

The desire for all of us  – friends and family of the Banky’s – to assemble on Hornby Island was made more acute by John’s passing. Now we would come to honour the lives of both of their sons. We would bring our support and love and hugs, and would receive the same in return.  We would bring food and drink and music and bonhomie – the key ingredients of any good gathering which are always so plentiful at Banky events.

Driving up the inner coast of Vancouver Island on the slower oceanside routes under full sun and warmth in mid-June before tourist season, is blissful. Many of us were making the trek to Hornby on the Friday night to settle in before Ben’s 50th Birthday Bash on Saturday. Cathy and I shared a cottage with our good friend Craig on Anderson Drive  – just a short walk from the Banky’s home on Oyster Place, and Ben’s business partner Matt, and his wife Shino & daughter Emma rented a waterfront house – also on Oyster – which created a private enclave where the events of the weekend would unfold.

Friday night was BBQ and potluck at the Breech’s, and was reserved primarily for off-island friends and family who’d travelled great distances – some coming in from as far away as Toronto and Boston – to be there. The above picture was taken from their deck looking east towards Texada Island and the Coastal mountains of the Mainland, and, luckily for all attending, the blue skies and warm weather stayed with us all weekend.

Hornby Island is – without a doubt – one of the loveliest of all of the Gulf Islands, and might arguably be the most beautiful spot in BC. I fell in love with this place when I first hitchhiked here at the age of 14 with two highschool chums, and have been coming back as often as I could ever since. It was here that I met Ben at the first annual Hornby Island Blues workshop in 2000, and here that I would stand as his Best Man and MC at his wedding, and here where we would lay his ashes to rest at the “Ben-der” in 2010.

We awoke on June 16 – the day of Ben’s celebration – with a mind to explore some of the cherished places that Hornby has to offer. For me, any trip to Hornby must include a walk on Tribune Bay, a hike at Helliwell Park, a visit to the Ringside market & Farmer’s Market, and a trip to Ford’s Cove. Luckily we were able to do all of these things – here’s a picture of Cathy & I at Tribune Bay. 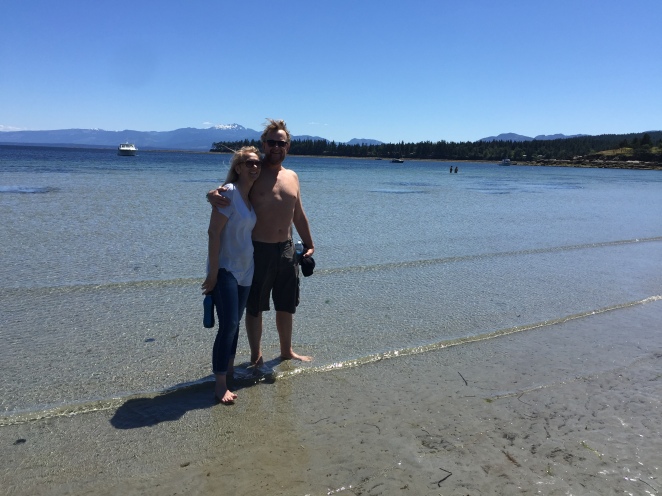 Saturday’s celebration of life – of Ben’s 50th Birthday – was being held at the Banky’s home, commencing in the early evening with a sizeable crowd expected to turnout. Jake & Kathy are long-term and well-loved stalwarts of Hornby’s community. Their active involvement in island culture, Jake’s legendary Apple Snake hooch and Kathy’s renowned cooking have earned them well-deserved reputations as warm and inviting hosts. Off islanders have gathered and locals will arrive to contribute food, drink and camaraderie to the festivities. Old friends were reunited, tables creaked under the weight of food, the outdoor bar was well-stocked (until it wasn’t), instruments appeared, singing followed, and maybe, in the midst of the gaiety, tears were shed…how could it be otherwise?

If Ben were still with us and if I were still drinking the party would have been noisier and gone later, and maybe some form of mischief might have ensued. Despite this, the rest of the celebrants did an admirable job 🙂 It was a bittersweet and magnificent event.

Sunday morning, early,  after a party at the Banky’s – one of those moments where 6 years of sobriety pays off :). Our day would unfold very much like Saturday…breakfast at the Ringside Market, exploring, enjoying and absorbing the natural beauty of this place – and we found time for an additional trip to Whaling Station Bay and a little spelunking of tidal pools and driftwood. Tonight’s wrap up to this glorious weekend would be hanging out on the Breech’s deck for leftovers and BBQ, while the Banky’s gathered their clan next door for a more intimate – and sedate – family get-together. 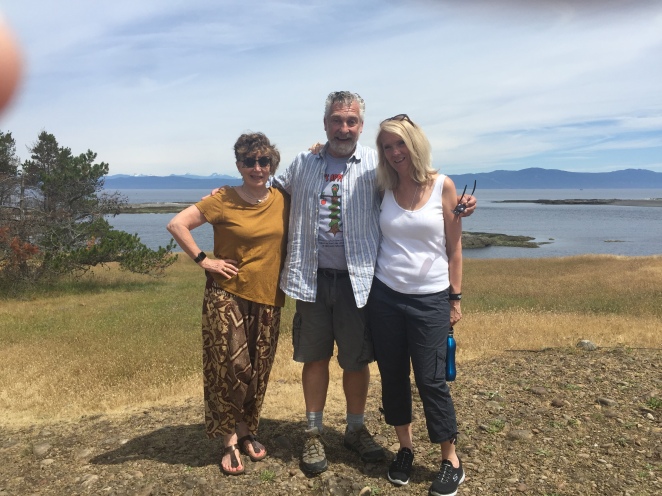 Our Sunday night gathering at Matt & Shino’s was a much smaller group, as many friends and family had to return to their Monday morning off-island lives…mellow and conversational…a sweet meditation on a busy emotionally conflicting weekend. Here’s a little video of our amphitheatre of bliss with Cathy, Shino, Nick, Craig, Matt, Emma & Cam present.

Up to this point in the weekend, I can’t say that there was anything noticeable missing from an otherwise perfect celebration of Ben’s – and his brother John’s – lives. At least not until the sound of Ben’s deep baritone came to us via Matt’s sound system – it was Ben, singing our dear friend Lolly’s song “Shana Na” backed up by Big Head Project. This song was recorded on a CD called “Great Stuff”…a collection of tunes written by Lolly and recorded by his friends after his untimely demise in 2005. We all paused to soak in the moment…the warm embrace of Ben’s voice like an audible hug.  Here’s the tune – have a listen:

As the song was ending, and we were all sitting in quiet contemplation or murmuring appreciatively, I remembered that I had Doug Mollenhauer’s song “Sudden Blue Sky” on my iPhone – a song Doug wrote in honour of Ben after Ben’s passing. It’s a beautiful and powerful song – haunting and poignant – and seemed absolutely fitting for the moment that we were in. As some present had not heard it before I suggested that we play it and everyone heartily agreed…here it is:

With the setting of the evening sun on the shores of the Salish Sea, with full bellies, surrounded by good friends and partners, and feeling connected to Ben through song, we were in a very mellow blissful state – it was quite grand. Then Matt remembered that he had brought a video – the video – of Ben & Lolly playing bongos & guitar on Doug Mollenhauer’s recording of “50 Something Blues”, a song which Doug had written for his brother John’s 50th…videotaped by Linda in my bedroom circa 2002-03. We all convened around the flatscreen for a viewing:

The beauty and serendipity of this moment was not lost on anyone present. The unexpected arrival of Ben – through music – was sweet synchronicity. Watching Ben, Lolly and Doug toast Doug’s brother John at the end of the video – the same name as Ben’s brother who had also recently passed, was one of those Jungian “meaningful coincidences” that cross our paths.  I am always grateful when such moments appear, for they are rare  – it was a perfect denouement for our weekend of remembrance – it was sublime…